I celebrated 2019 Holi in Mathura. I traveled from Chennai to Delhi in Flight and then from Delhi to Agra in Train. I stayed in Zostel, Agra and traveled from Agra to Mathura in a Cab. There are hundred and thousands of blogs online to help you on various things related to Holi. This is mainly focused solely on my experience on 21st Mar’19 in Mathura. This comprise what I envisioned beforehand, what I experienced in the ground and the commotion it created inside me.

I’m from the southernmost part of India where we don’t celebrate or play Holi. I haven’t played Holi in my entire life and in 2019 somehow I got fascinated by the Holi festival and jubilation. It is not only that I haven’t partook in Holi celebrations, it is that I haven’t even seen a celebration in person nor did I happen to hear Holi celebration planning in my city, let alone received invitation. Holi is that uncommon thing in Tamil Nadu (of course the things are changing). So I searched where and when to celebrate in India. I was surprised to see the number of places where it is celebrated grandly and even more surprised to see the number of days /events it is being celebrated. 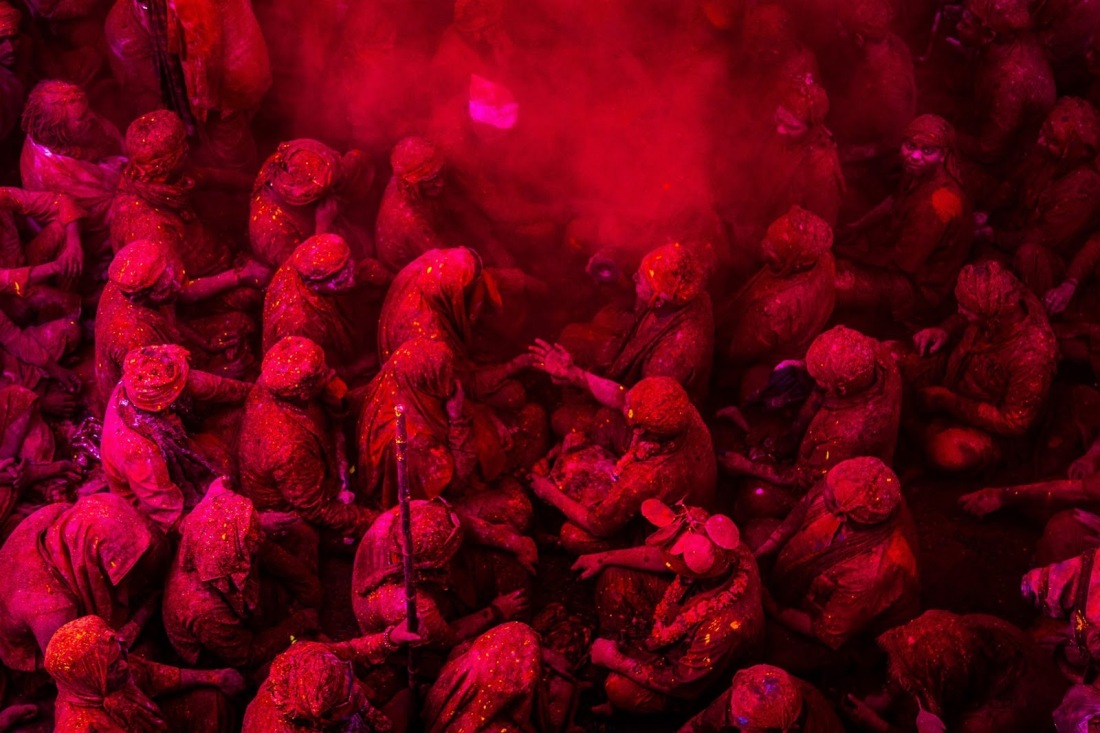 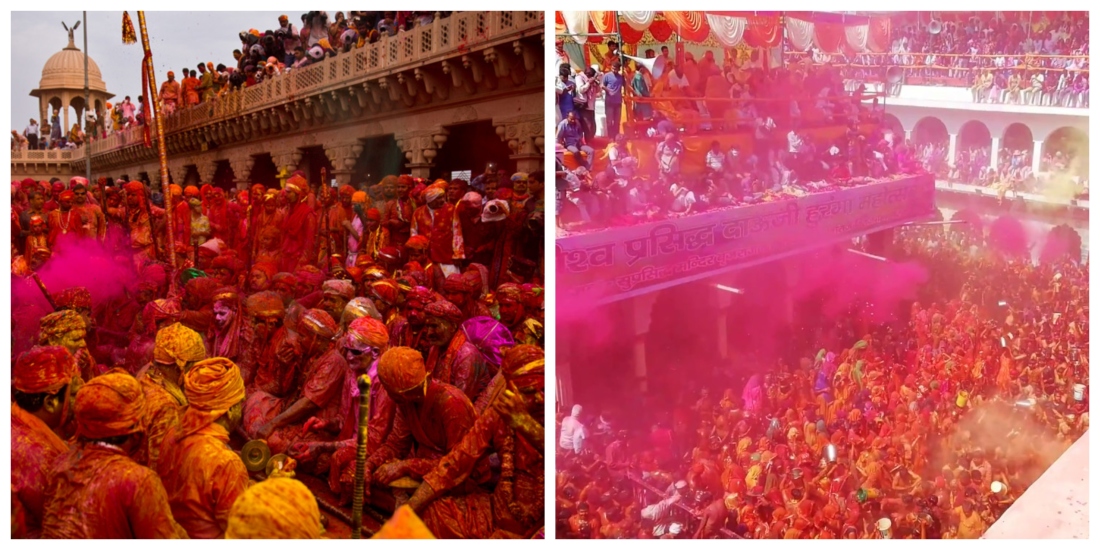 The time I spent in searching all about Holi in social medias and blogs I started falling more for the colorful and vibrant festival. I badly wanted to attend at least 5 out of 7 events mentioned above, but I made to Mathura Procession (21-Mar) only. My trip expectation has started raking high with the start of the festival on 15th Mar as awe-inspiring, covetous, envious pictures started pouring in my Instagram wall. I was looking forward for the sight of priest throwing waters on the crowds, tourists and photographers occupying a perfect-access-to-action-spot on rooftop to stand/sit, air-filled with different color powders, the bhang, the dhol & dance. I studied how to remove colors from skin and hairs, bloggers suggested other handy points like applying oil beforehand to remove colors later on easily, even found out video helping how to protect camera gears from the color powders & waters. With all this, I couldn’t suppress the urge to land on Mathura.

The only thing, of all the things I heard or read, I hoped not to be true was misconduct on women. Most of the bloggers mentioned about this but still there are a lot of women interested to visit and have actually visited and enjoyed thoroughly without stating single blemish to the conduct. So the fingers crossed for everything single thing.

I reached Agra on 20th Mar evening. Next day reached Mathura in the morning through Cab. Almost all the people travelling along the way was painted with colors and Mathura too welcomed with splash. The people were throwing colors, waters at themselves and at anyone and everyone. My cabbie dropped me in the Visharam Ghat, I sauntered through the sloppy marg-s where small kids and youngsters throwing colors and shooting pichkari’s only I was not evading.

I had no idea which direction to head or which marg to choose except the name of the temple – Dwarkadheesh. I just followed the crowd and no confirmation was needed if I reached the right place. The Dwarkadheesh temple was not standing out, placed exactly like the other shop along the road, despite the appearance and its simple, narrow entrance, there was no way mistaken Dwarkadheesh temple for something else. The people were fighting to enter the narrow staircase, leaving the footwear outside (I couldn’t able to identify my footwear in its new makeover in different color when I returned).

The moment I entered the temple, enlivened crowd were beating the dhol, throwing powders in the air, the priest throwing waters, a person coloring everyone, the photographer nicely standing in a brick sized platform annexed along the wall of the temple, all pointing their plastic wrapped gears and clicking at anything and everything. I stood there in the middle of the crowd for some time, took time to soak in the mood and color of the festival. People surrounded near the dhol were animated and busy beating the dhol, others around them and inside the temple looking at them in action and clicking pictures.

Then I started moving around the temple. The temple was small compared to the other temples in Virndavan and Nandagoan Holi playing places. The crowd also stood there in front of entrance and inside the temple but around the temple was almost empty by 10.30-11.00 A.M itself. People were coming and moving out momentarily. The most disappointing part for me was Dwarkadheesh Temple was not even nearly matching to the crowd, space or the typical standing-on-the-roof styled celebration went around in social media boasting the atmosphere of Holi. Apparently the crowd and space is bigger in Virdavan, Nandagoan and Barsana. My bad, I should have researched on this earlier, but I haven’t witnessed yet.

And then I decided to walk along the marg-s around the temple and ghat. The marg-s are lively and celebrations are intense. Men throwing colors, kids spraying pichkari-s, women throwing waters from the terrace or balcony. I was cautious and careful, not for the hidden people on the up or the mischiefs on the side, but on slippery road.

I walked on my own for an hour till my cabbie found me in the middle of the road. He then ushered me, relieving me from searching him, to the car hassle free. My first ever Holi at one of the birthplace of the very festival turned out to be amazing and fiery.

I have had expectation of my own and the reality of the festival which induced an insight, basically how the festival transformed over the years and presenting itself to the world.

To begin with, my first realization came through the form of my friend. My friend asked ‘why to go all the way around 2500 kms to just play Holi’ when I asked my friend to accompany me to the trip. I was completely deep into the plan and excited about it by then when the slap came. But it was just another view-point, there are people who think it is ridiculously unnecessary to fly over to 2500 Kms to play Holi with complete strangers when the same can be played any local terrace or ground with lot of friends and families. This is so true considering that people in Agra, Delhi, Jaipur which are so close to Holi celebrating towns are arranging similar Holi celebration in common terrace, ground or farm houses for which even people from foreign countries are attending. But having said, it is just other point of view as still people from all over the country and globe is flocking Mathura, Virndavan, Nandagoan, Barsana, Pushkar to celebrate the real Holi and experience the actual vibe once in their life time. So I never once felt that my decision to partake in Mathura Holi Procession was ridiculous, just became aware of other point of view.

The next odd thing which hit me was local’s involvement. The Holi fever was evident even when I landed in Delhi a day before. The fever was high in adjacent cities, I could spot people with stained skin or clothes but on the Mathura in the temple or in the Marg-s the local’s participation was limited to kids and others whom I will touch in detail in next point. The local’s abated participation is not an unique thing to Holi, this is the case for all other festivals in the modern world due to various reasons. We can able to understand this if we compare how we celebrate our festivals back home. The tradition of temple celebration in all these coveted places are mainly due to the tourists. But we need to appreciate and be grateful to the authorities / locals who still engage this lively celebration proudly. It is not that local people do not celebrate at all, they actually do celebrate more wildly and reverently but the crowd get split as Holi has different events in different days and places, like lathmar where women participate highly, phoolon Holi where flowers are thrown, widow’s Holi where older women celebrate, curtain day where local or family gather and other Holi procession mainly for Tourists. So it’s up to us to understand clearly what we need to experience & end up being in the right place without getting disappointed.

The final thing which was harshly evident in Holi celebration (the same I mentioned in above point to be spoken here) is the women safety and some men advantage-taking-attitude. It was mentioned ad-nauseam in blogs that women are treated badly, owing to the fact that none of local women can be spotted in the marg-s except over the terrace throwing waters on the passerby. The things like touching, feeling, and groping a woman’s body is very common. The tourist assembled there enjoying themselves and celebrating in a decent way whereas locals are split in two categories: a) one who celebrate crazily among themselves not even aware of tourists and b) one who wait for some women to turn up to feed their desirous hands. In either cases, the nature of the Holi has adopted new avatar, the avatar where a lone man can walk through the local margs without even straining his skin or clothes. Do you believe this, this is the harsh reality (at least in Mathura). The festivities and celebrations are contagious, be it good of bad, and manifestly the local kids and women have contracted celebration called target-women syndrome from youths, even they hardly throw, splash or shoots any random person except for a woman. The priority goes on like solo women à women à foreign men à biker/police/taxi driver (basically who is working on the day) à and finally Indian men. The women are left with no option than to endure this – some take this as celebration vibe, some fume, some even cry. Even the boyfriend or husband or friend couldn’t completely control the embarrassment to their women.  This particular attitude of locals is a threat to the life of the festival. This turned out to be dark side and a bitter pill to swallow.

The recommendations are relative and vary from person to person and mind to mind. The way and the time the festival survived itself proclaim the way it’s being organized and managed. I personally have nothing to recommend on this part, I’m already in awe of the festival’s survival and popularity. Neither do I have any recommendation on locals’ involvement & active impartial participation in the celebration as it is everyone choice which cannot be forced but making the festival popular and proud would do wonders.

The only recommendation I have is on local people mindset; the festival is not a public license to take advantage on women whatsoever. If the celebration and focus extend from women to everyone in an un-hurting, non-embarrassing way the popularity would grow many folds. The recommendation is, straight forward, to make local women participate in the Holi procession more openly, so voluntarily. The day the local women started turning up to the celebration (of course, there are certain celebration involving women and exclusively for women but the expectation is to make them participate in Holi procession happen in Mathura & Virndavan) is the direct indication that no misbehavior towards women are entertained and carried out. Or the worst recommendation, would be to the foreigners or tourist, to avoid Holi at Mathura circle until the celebrations get refurbished itself by going back to the olden days’ celebration and straightened through self-realization.